Paul L Modrich, Tomas Lindahl and Aziz Sancar share the 2015 Nobel Prize in Chemistry for their contributions towards the mechanistic studies of DNA repair. 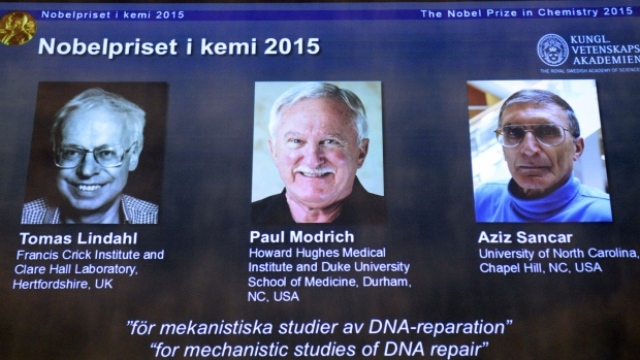 Nobody needs an introduction to DNA. Nor to its structure or function. These aspects of life have become the quintessential part of our knowledge that even high school science textbooks dedicate chapters for that. So much for what's known but so much more for what's still mysterious to mankind. Being the backbone of life is a great responsibility for a chemically labile molecule like DNA. Constantly exposed to biological, chemical and physical agents which can potentially alter the structure and hence the function, these molecules have to be extremely on guard to keep its integrity intact. Well, if these molecules could determine how the entire living race should be on earth, we should've guessed that they have their own extremely efficient system to repair their defects.

The works of Paul L Modrich, Tomas Lindahl and Aziz Sancar were more than just this guess. They probed and deciphered three of the most intricate and systematic mechanisms by which DNA repairs its single-strand defects during replication.

Base Excision Repair
Swedish cancer researcher Tomas Robert Lindahl described and isolated DNA ligase and DNA glycosylases. He demonstrated how DNA glycosylases remove inappropriate nucleotides to form apuric or apyramidnic (AP) sites in DNA single strands that are then nicked by AP endonucleases. A short or long patch repair will then seal the resulting break with the correct sequence of nucleotides.

An MD, PhD by training from Karolinska Institutet, Stockholm, Lindahl is still an active researcher in cancer biology. He holds the positions of emeritus group leader at Francis Crick Institute and emeritus Director of Cancer Research UK at Clare Hall Laboratory in the United Kingdom.

Nucleotide Excision Repair
When base excision repair corrects small defects, American chemist Paul Modrich described another mechanism by which bulky defects are repaired in DNA. DNA addicts formed mostly due to ultraviolet radiations are removed in bulk and the resulting breaks in single strands are sealed by DNA ligase using the other strand as template.

Paul Modrich holds a graduate degree from Stanford University. He is still an active investigator at Howard Hughes Medical Institute. He is academically active and is a Professor of Biochemistry at Duke University School of Medicine, USA

Mismatch Repair
Turkish chemist Aziz Sancar demonstrated the evolutionarily conserved process of mismatch repair by which incorrect base pairing that escapes proofreading during semi conservative replication of DNA is corrected. Efficiently mediated by a set of proteins, this is one of the most important reasons for DNA fidelity over millions of years of evolution.

Aziz Sancar was born in Turkey and earned his doctorate from University of Texas. He is currently a tenured Professor of Biochemistry and Biophysics at University of North Carolina School of Medicine, USA.

Though these are the basic facts we learn even in our initial years of scientific journey, tremendous efforts and precise experimentations were involved in deciphering these complex mechanisms. These efforts were honored by the coveted Nobel Prize in Chemistry yesterday by the Swedish Academy of Sciences. Thanks to the teams of these eminent scientists, we are one step ahead in comprehending the intricacies of life and go forward in our endeavor towards conquering the challenges of life, disease and death.