Takaaki Kajita and Arthur B McDonald share the 2015 Nobel Prize in Physics for their discovery of neutrino oscillations. 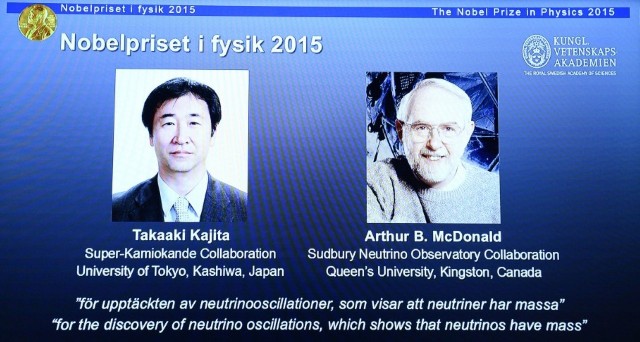 It is postulated that the Bing Bang produced equal amount of matter and antimatter. If matter collides with antimatter, both will disappear in a flash of energy. So if there's equal amount of matter and antimatter in universe, these collisions should be very frequent and inevitable. So why isn't everything just light and sound and heat? Why is there so much particulate matter? Or simply the question is why do we exist the way we are and not just turn into energy and disappear into space? This puzzled Particle Physicists for over half a century before a consortium of scientists around the world answered it with the simplest explanation a decade ago. Thus changing the very fundamentals  of Standard Model Physics once and forever.

Neutrinos are the second most abundant particles in the universe after photons. Very elusive in nature, they hardly interact with anything. These subatomic particles were considered massless ever since they were discovered by Clyde Cowan and Frederick Reines in 1956. It was thought that their existence didn't change anything in universe and hence the name Neutrino (little neutral one in Italian). Neutrinos are produced during nuclear reactions, hence abundantly produced in the core of stars including the Sun and atmospheres as well as cores of planets. Though abundant, we do not feel its presence, thanks to its neutral nature. A billion neutrinos pass through our bodies every second. But being ubiquitous, they do not change anything they pass through. It is said that a neutrino can pass through a light-year (six trillion miles) of lead without colliding with a single atom. But occasionally, they do collide with atoms and release charged particles like electrons, muons or taus (heavier electrons) depending on which they are classified into three flavors. Earth receives neutrinos mainly in two ways. Solar neutrinos from the solar core reactions and atmospheric neutrinos from particle shower. Based on cosmic reactions, the amount of each neutrino flavor reaching earth had been theoretically calculated by quantum physicists decades before.

A consortium of scientists in Canada, USA, UK, Portugal and Japan started studying neutrinos in 1990s. The team set up two large observatories deep inside earth to avoid surface disturbances. The Super Kamiokande Observatory was placed 1000 meters deep inside a zinc mine under Mount Kamioka 250kms north of Tokyo, Japan. It is a stainless steel tank containing 50000 tons of ultra pure heavy water to receive atmospheric neutrinos, viewed by 11000 photomultiplier tubes (PMT). The PMTs pick up electrons ejected from heavy water molecules on collision with electron neutrino and give light signals. Japanese Physicist Takaaki Kajita headed the team. The Subdury Neutrino Observatory (SNO) was placed 2100 meters deep inside a nickel mine in Ontario, Canada. With an acrylic vessel containing 1000 tons of ultra pure heavy water and 9600 PMTs, the team headed by Canadian Physicist Arthur McDonald studied solar neutrinos. After decade-long meticulous experimentations and observations, the teams reported that though the total number of neutrinos calculated theoretically was proved to be accurate practically, the number of each flavor was wrong. More precisely, they reported how neutrinos flipped from one flavor to another as they travelled through space. Termed Neutrino Flavor Oscillations, this redefined time and space in a whole different dimension unknown till then. By the basic theories of Quantum Physics, neutrinos should have mass to oscillate.

Breaking the initial cracks in the foundation of Standard Model Physics with non-zero mass neutrinos, oscillating from one flavor to another paved way to a new branch of Particle Physics with infinite possibilities. Though tremendous efforts of a large global team were involved in this, the two pioneers of the field were honored with 2015 Nobel Prize in Physics yesterday. Both of them expressed their inadequacy as individuals in the field and dedicated the honor to the whole team.

The simplest explanation for why we do not disappear as energy is that the so-called neutral, ubiquitous, elusive neutrinos choose their flavors from time to time and escape from their corresponding antineutrinos. Hence matter is constantly chosen over energy. And we exist today. A good start, right?